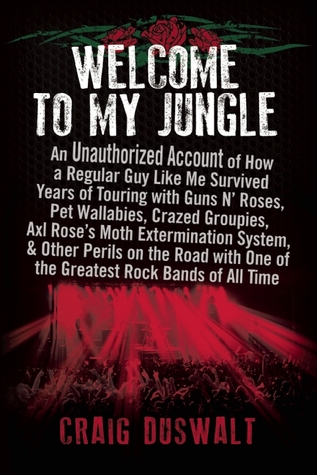 CRAIG DUSWALT – Welcome to My Jungle

Craig Duswalt will probably not be a familiar name to most, but he used to work for Guns N’ Roses as Axl Rose’s personal manager during the years 1991-1993, and Welcome to My Jungle is basically his account of how life on the road with the aforementioned band was during the Use Your Illusion Tours and all the stuff that he encountered and experienced back then. In a sense, this is not your typical rock music biography. If you are looking for any juicy or insane stuff I suggest reading the biographies of Slash, Duff McKagan, or Steven Adler instead. What I found interesting about Duswalt’s story is that one gets a totally different perspective on how life on the road with a hugely succesful band unfolds and how stressful and downright crazy it can be at times. The book does contain plenty of funny and amusing stories, but Duswalt hardly has a bad word to say about anyone. It is quite clear that he has a ton of respect for Axl, Slash, and so on, which is cool, but on the other hand one does get the impression that he is holding back a little in places so as not to offend anyone.

Call me a geek, but I found it quite interesting to read about the logistics and routines of touring with a major act such as GNR and how Duswalt overcame and handled a lot of tricky and difficult situations. He is not afraid of admitting how and when he made mistakes or simply handled a few situations badly and what the consequences of that were. In terms of chronology the story jumps back and forth in time, which is okay as it does not ruin the flow of Duswalt’s account, and the chapters are rather short and read quickly. Duswalt is not exactly the greatest storyteller of all time, but on the other hand he seems sincere, honest, and down-to-earth in most places. I strongly dislike some of the references and allusions to his current-day activities as a motivational speaker that seem to creep into the story from time to time. They seem like a sales pitch and are hardly any relevant to the story. Also, he does tend to repeat himself in places, but I think that mainly comes from him being enthusiastic when recounting how much he loved being on the road with GNR.

Welcome to My Jungle contains nothing that I would deem sensational or earth-shaking, and, like I said earlier on, if you are looking for a biography that chronicles the debauchery and partying of GNR in their heyday, then you need to look elsewhere. I think a lot of fans of GNR may find this utterly boring as it hardly contains anything wild and excessive, but it does provide a different insight into the workings and mechanisms of a major act rock band that was stuck in the grind of touring for nearly three years. It certainly has something fun and authentic to it that appeals to me, and it was quite refreshing to read a biography relating to a hard rock band that has a completely different topic to it compared to those that only revel in chaos and rock ‘n’ roll excess.