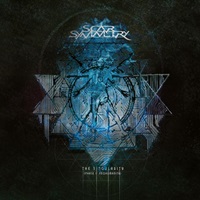 These Swedes have always looked to expand their melodic death horizons – employing two vocalists in the clean and extreme realm, and now on their sixth studio record "The Singularity (Phase I – Neohumanity)" dabble into vocal harmony horizons plus outer world keyboards more familiar to 1980’s AOR acts than metal bands. Per Nilsson throws down wild runs on the keyboards that mimic computer and video game tones of a by gone era – while his guitar playing is exemplary and very fiery throughout.

Clean vocalist Lars Palmqvist and harsh vocalist Roberth Karlsson also step up their game – be it on the 8:43 progressively intuitive "Neohuman" or the shorter, more mid-tempo groove oriented "The Spiral Timeshift", their work pushes their creativity to new boundaries – higher and lower – than ever before. You can be fast, technical, and dazzling in this genre – but in the end, it doesn’t amount to a hill of beans without dynamic construction and proper hook/ melodies, and Scar Symmetry reach for the stars on this effort. Even the drumming melodic death shuffle from Henrik Ohlsson on "Neuromancers" is the type that brings ingeniousness to mind, a game changer in terms of establishing another nuance and differentiation point to the band’s style.

At 43 minutes, Scar Symmetry set themselves up well as this is the first album in a proposed trilogy. Let’s pray that the second and third records live up to the promise and execution of this one – as "The Singularity (Phase I – Neohumanity)" is their best effort since their "Symmetric in Design" debut back in 2005.