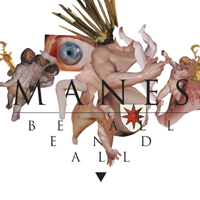 MANES – Be All End All

The Norwegian shape-shifters known as Manes recently released their 9-song effort entitled Be All End All, which is filled to the brim with experimental soundscapes and otherworldly atmospheres. There are references to experimental jazz music, dark ambient, industrial music, and trip hop scattered throughout the album while the clean vocals and singing add a melancholic and haunting touch to the compositions. While the clash of different genres, styles, and influences on Be All End All may throw the casual metal fan off, there is plenty of interesting stuff present on this disc for the open-minded listener to lose him- or herself in. I really dig the cinematic moods and feel of the album and the many layers and nuances that continually seem to pop up and reveal themselves whenever one listens to it. Ultimately, Be All End All is the kind of album that is difficult to describe or sum up in words. Rather, it should be experienced in its entirety from start to finish, preferably through a set of really good headphones.