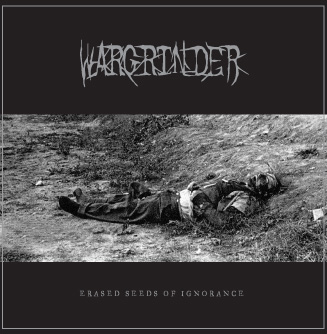 As the bandname strongly suggests, Wargrinder from Greece is a fucking intense and insane black/death metal outfit from the deepest and ugliest pit of hell. Musically, Wargrinder brings to mind bands such as Conqueror, Revenge, Blasphemy, Unholy Archangel and Beherit, which should tell you all that you need to know, really. Erased Seeds of Ignorance is a compilation containing some of the early recordings by the band, namely three different ones dating from 2001-2003. The quality of the songs differs a bit and so do the production values, but that is hardly surprising given that three different releases composed and recorded at different points in time are essentially gathered on this disc. I will be the first to admit that this type and style of black/death metal rarely does anything for me at all, but Erased Seeds of Ignorance certainly has its moments and charms. Eespecially the six songs that constitute the Superior Onslaught release are pretty wicked and catchy. If sick and violent black metal madness is your cup of urine then by all means check out this raw and hellish compilation CD. I could not listen to this every day. That I will admit, but once in a while this infernal and noisy metal onslaught just works for me.