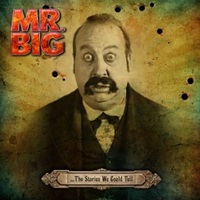 MR. BIG – …The Stories We Could Tell

The eighth studio album from Mr. Big is another textbook case of four experienced musicians executing fine melodic hard rock full of stunning musicianship and catchy hooks/ harmonies. Bassist Billy Sheenan currently has to split his time between the progressive hard rockers The Winery Dogs and this act, fleshed out with vocalist Eric Martin, guitarist Paul Gilbert, and drummer Pat Torpey – but do not fret, as these 13 songs again produce goose bumps for the balance between jamming old school interplay and knowledgeable structuring to keep the songs individual and dynamic.

"…The Stories We Could Tell" works because at the heart, songs are what will carry the day – and the proficient abilities at their respective instruments shines at the appropriate moments. The band will throw out a song that has older 1950’s and 60’s chord progressions and then beautiful multi-part harmonies for instance on "Satisfied", then something in a Rolling Stones meets ZZ Top manner as "What If We Were New" in terms of slide guitar and church-oriented background vocals. Beyond their normal shimmering, propulsive melodic hard rock – Billy’s bass plucking against Paul’s bluesy guitar runs for opener "Gotta Love the Ride" and then their stair step slides on the mid-tempo "I Forget to Breathe", the latter a stand out for Eric’s professional, playful verse and chorus work.

And when the band add in acoustic touches to "Just Let Your Heart Decide" – it’s not a retread of their number one hit "To Be With You", but more of a semi-power ballad as Eric explores more of his lower and mid-range facets to his voice while only reaching the stratosphere for added chorus emphasis. Free to be what they wish to be and worry less about being commercially accepted, Mr. Big emphasize their strengths – technically sound and writing convincing hooks and harmonies that you’ll be humming for weeks and weeks.

Another strong record in a catalog that is already high class, "…The Stories We Could Tell" is magnificent, rich, and full of connection on multiple levels – dig deep and you’ll gain a lifetime of appreciation here.