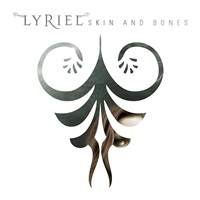 Intertwining two very popular sub-genres in metal these days, the folk/ gothic oriented German sextet Lyriel give your ears a variety of sounds to latch onto. Their fifth studio album "Skin and Bones" provides the listener 13 more songs where the band straddle elements that recall yesteryear melodies, classical violin/ cello instrumentation and symphonic/ dramatic keyboard lines against electric parts that seem more forceful and addictive than ever before.

"Falling Skies" for instance has this very simplistic guitar/ vocal refrain in the second half (‘let them fall’ reverberating in my brain for days on end) that has a lot of "Hallowed Be Thy Name" qualities, while Jessica Thierjung angelic siren word charm floats effortlessly over the top. "Black and White" has a haunting neo-classical/ Middle Ages opening before quietly moving back and forth between folk, gothic, and harsh death textures – adequately living up to the title. The mid-tempo tracks often work best for Lyriel, the hook set up being a synthesis of Oliver Claymore’s guitar and Joon Laukamp’s violin syncopation, while the vocals can snake charm around as in highlight "Your Eyes". You’ll even get a German language-led "Der Weg", the main riff very modern groove oriented against some intriguing folk counterbalance parts to allow the aggression room to breathe (although the squealing notes can be a tad too one-dimensional).

"Skin and Bones" has more of that streamlined approach that seems built for the songs to transform on stage – I can picture an abundance of soccer chants, clapping, and sing-a-longs through the 55 minutes. The combination of styles just gives your eyes and ears so much variety to take in – and as a result Lyriel could gain decent appeal across a great swath of metal followers.