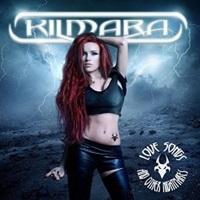 The third studio album from Barcelona, Spain’s Kilmara has a strong melodic heavy metal foundation throughout its 12 tracks, occasionally gaining an extreme vocal aspect to help vary the vocal presence. Masterplan guitarist Roland Grapow handled the recording/production duties at his own Grapow Studios, allowing the quintet the chance to really focus on their craft. "Love Songs and Other Nightmares" is in line with a lot of song-oriented European melodic metal, with the knack for showcasing guitar hero lead breaks and steady, strong rhythms/ tempos.

They are a couple of nods to the current American metal movement in terms of tones and aggressiveness, especially "Devils Eye" and the follow up "The Break Up" that could be in line with Avenged Sevenfold if taken through a Firewind or 90’s era Metallica filter. Vocalist Christian Wolfgang Kohl has a controlled lower and mid-range nature to his voice, not one to soar to the high heavens but more in line with a lot of the arena voices you’ve heard in the past 20-25 years. Jonathan Portillo and Enrique Torres team up for solid axe riff and lead break work – powering up through semi-gallop and Priest/Helloween like parts during one of the album highlights "Usual Strangers". The album also has a couple of guests, including violinist Kaleb (from pagan death metal band Drakum) on the folk-ish "Alpha", that is punctuated by a lot of cultural harmonic elements that could make this a future Kilmara classic.

Given my first exposure to this band through "Love Songs and Other Nightmares", I would say Kilmara have a good grasp of their strengths and their sound. They seem to balance natural ability in melodic metal and familiar power conventions with modern tuning, but never really fall overboard in terms of commercializing their sound. I expect bigger and better things to happen soon for this fine group.