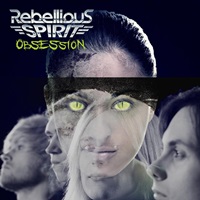 German hard rock with a melodic meets post-grunge edge, Rebellious Spirit are back for their second full-length on "Obsession". Still in their late teens and early twenties, the band possess a smooth swagger that probably comes from their love for American hard rock acts as diverse as Skid Row, Guns N Roses, and Avenged Sevenfold – but acknowledge the European musicality that I think becomes engrained as you pick up the style in your youth.

Once again like last year’s "Gamble Shot" record, try as I might to get into these 12 songs, there’s a combination of issues that fail to elevate tracks like "Lost" and "Between the Highs and Lows" beyond bar band appeal. Guitarist Jannik Fischer as a singer has a weird warble to his melodies, something that could rub people the wrong way if expecting a grittier or smoother touch. A lot of the hooks aren’t standouts, and although the tempos can get toes tapping and bodies moving, the material just has this flat line effect coming out of the speakers. The keyboards squelch any hope of heaviness on "Forever and Ever", and the slow, clean guitars for "Walls of Lies" give way to another awkward Jannik vocal performance.

It’s not a good thing when taking in basic hard rock to be bored after the third song – and this is where Rebellious Spirit fail in comparison to contemporaries like Hardcore Superstar or Reckless Love. Better hooks, stronger melodies, energy and excitement equal a memorable, long lasting affinity for a group. "Obsession" leaves me with nothing close to this, so unfortunately they get cast aside.