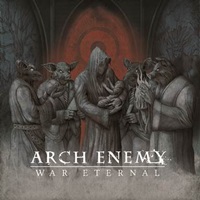 Arch Enemy is an old vestige of Gothenburg death/heavy metal. Their beginnings may not reach as far back as Metallica’s, Megadeth’s or even Pantera’s but they have been around long enough to know what we expect from them. To that respect they usually deliver the goods. In my estimate, while taking away nothing from their two crowning works, "Burning Bridges" and "Wages of Sin", 2011 "Khaos Legions" was the best album of their career. "War Eternal", though at times ambitious and experimental, does not, overall, live up to that standard, but it’s not by a long shot. Most of the songs just sound too familiar, too safe, shall we say, to my ears. This is a heavy album, more death than heavy metal, but still, time is a merciless judge of quality.

Let’s consider the facts. The album consists of 13 songs, out of which 3 are, well placed, instrumentals. This leaves 10 actual songs, half of which (War Eternal, No More Regrets, You Will Know My Name, Stolen Life and On and On) are good, heavy, catchy examples of a death roll that oscillate too comfortably between metal and pop, as the verses are quick, precise and reveal just as quick and fleeting choruses. I would not call it lazy, far from it, more like business as usual, with nothing to grab my heart, throat or mind.

Fortunately, the remaining songs (Never Forgive Never Forget, As The Pages Burn, Time Is Black, Avalanche and Down to Nothing) are each examples of highly creative and gripping craft. The verse riff in "Never" is so spectacularly aggressively death metal it gave me flashbacks of "Black Earth", while "As The Pages" was a love at first "spin", especially Michael Amott’s beautiful conclusion . "Time Is Black" is one of the most elaborate, downright classical, pieces in Arch Enemy’s discography. "Avalanche", too, with fantastic chorus, has another notable verse riff to rival "Never" and "Down to Nothing" chorus echoes "Savage Messiah" off "Wages of Sin", probably on purpose. The album is closed by a mournful instrumental "Not Long For This World" which recalls the similar vein of the title closer of "Burning Bridges", complete with the powerful, apocalyptic drum echoes, all probably not on purpose.

All in all, I count "War Eternal" as a more aggressive and varied effort than its predecessor, with more murky, more aggressive production, with clarity and harmony shining while wrapped in palpable heaviness, possibly due to Nick Cordle’s handling of the rhythm guitar, fresh "blood" – fresh fire! Yet while Michael Amott holds his own (the chorus tremolo guitar in "No More"!), and at times Alyssa White-Gluz sounds more vicious than Angela Gossow (Never Forgive), and the change of vocalists and guitarists does not seem to have caused either improvement nor downgrade in overall quality, the group’s output appears to be uneven and therefore I cannot bring myself to rate it higher than 4.5/6. A good but uneven record.