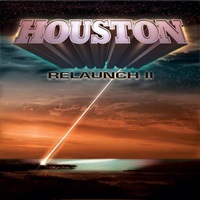 Swedish AOR band returns with an album in "Relaunch II" – an unusual move in their career as there are 4 new original songs and 6 covers made famous by artists like John Farnham, One Republic, Rick Springfield, and Lady Gaga among others. Let’s get to the originals first: "Don’t Look Back" has a strong guitar hook and reflective, quieter verse work, "Our Love" has a sugar sweet chorus and guitar/keyboard parts to match, while "Downtown" is something I could have imagined during the "Vital Signs" Survivor heydays if Poco and The Outfield were fronting the group.

Onto the covers. "Counting Stars" originally done by One Republic and "Do What You Want" from Lady Gaga are obvious stabs at Houston appealing to the under 25 crowd, but I don’t really hear either one outdoing the originals. "Justice for One" and "Souls" are more in line with their AOR/ melodic rock foundation, both strong from a musical hook, vocal melody, and arranging standpoint.

Ardent fans will want to pick up on "Relaunch II" – as the band do excel in this genre. I would rather have a new full length of original material – but considering the loss of co-founder/ drummer Freddie Allen occurred, the band took the time to expand to a six-piece ready to conquer stages wherever they can. Bright days are ahead for Houston – so if you love rich harmonization, 80’s style guitar parts and shimmering keyboards, this band is right in your wheelhouse.