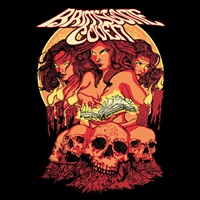 Dark occult rock, retro hard rock, whatever you want to call it – there’s definitely a buzz about this style that takes the sounds of the 60’s and 70’s and brings it forth in a way to appeal to a new generation that wasn’t even alive. Hailing from Wheeling, West Virginia, Brimstone Coven is a quartet of musicians that embody a love of doom, hard rock, and classic rock on this debut self-titled album.

Rolling out 10 songs in the main (along with 7 bonus cuts), everything from the cover art to performances screams 1972-1974 to these ears – when guitar sounds crackled through the amplifiers, bass sounds became as important as the electric guitar, and soulful vocalists took the genre to another level. I’m sure Led Zeppelin and Pentagram will come to mind – but do not neglect the influence of Pink Floyd, Black Sabbath, and Thin Lizzy into "Behold, the Anunnaki", the incessant hook-oriented "The Grave", and mid-tempo gravitational/ psychedelic groove track "The Séance".

Vocalist "Big John" Williams has a voice for the heavens, and yet can be quite chill inducing during low register moments. Guitarist Corey Roth is unafraid for introducing the wah wah pedal and other tactics of the Page/ Hendrix/ Iommi variety, delivering lead breaks that are emotional and fitting to the arrangement at hand. Wrapping my head around the rhythm section of bassist Andrew D’Cagna and drummer Justin Wood, they play such an important role in bringing home these hooks, the melody factor, and giving a boost to the integral chemistry element that is necessary to keep the songs vibrant, unique, and alive.

Even the epics like "Lord & Master" and "The Folly of Faust" never stay stuck in ho hum land, the main riffs building and flowing to grand conclusions. The bonus tracks consist of an earlier self-released EP in their career, of which "We Are Forever" and the trippy "Lost in the Odyssey" have the same swinging retro-rock punch as the self-titled album material.

In the end you’ll get close to 70 minutes of Brimstone Coven, and I think they have the tools to rival everyone going today in this movement. All those into Rival Sons, Graveyard, Vintage Caravan, and so forth will delight in this group – as well those who miss the output of those aforementioned classic bands.