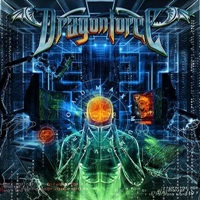 Maximum Overload is the sixth gallop through the universe for OTT power-metallers Dragonforce. I didn’t check out the last full-length release, so this is my first time hearing vocalist Marc Hudson plying his trade. I am happy to report that I prefer his style of vocals. He’s more conservative and a safer bet all round than ZP Theart and he doesn’t make everything sound like a sea-shanty attached to a fan belt. I have heard some commentators lamenting the reduction in the epicness of some Dragonforce output with him at the helm – this might be true, but since that epicness was so cartoonily overblown, a reduction is probably a good thing.

Not only is the epic quality down a notch, there are also more slower and mid-paced numbers here than we have seen in a single Dragonforce album before. Again, this is a welcome move, firstly because it provides a bit of variety but mainly because the guys prove themselves capable of putting together a well-structured tune when they decide to be a bit more sensible. (But then again, were you attracted to Dragonforce in the first place because they were sensible?) Another welcome move is that the band have stopped trying to bring their console gaming hobby into their music.

Ok, so in the long run with Maximum Overload Dragonforce might risk losing a few of their fans who only really loved them because they are such nutjobs. Overall though, if there is any justice, this album and the approach they have taken on it will give them a wider appeal and gain them more fans than they lose. I suppose everyone has to grow up at some time and it looks like the time is now for the London lads. What about you?