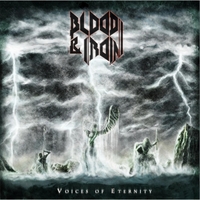 Originally seeing an independent release last year, German label Pure Steel saw fit to sign this Indian traditional/power metal band to a contract with their third album "Voices of Eternity". Guest vocals from ex-Dragonsclaw frontman Giles Lavery give this a high pitch sheen, musically in line with old Manowar, Iron Maiden, and possibly a touch of early Queensryche – although when they pick up the pace some thrash elements come into play.

Plenty of parts to scream and energize the true crowd, but I struggle to find the strongest hooks that will separate them from the hordes struggling to gain attention beyond their veteran influences. Guitarist / bassist Ashish Shetty and guitarist Vikram Bains take the lion’s share of excitement for Blood & Iron, intertwining riffs and lead harmonies for "Your Own Voice" and the quiet to heavier "Ghost of a Memory" that showcase future promise. I do not know if Giles is the right fit vocally for the group – his tendency to stay in falsettos hampers them when I would rather hear a Dio-oriented melody, especially in the mid-tempo or anthem templates such as "Path Not Taken".

India is a country that has been a hotbed topic for many international bands: festival and touring situations are cropping up to further inspire metalheads to form bands and create their own music. "Voices of Eternity" to these ears is a see-saw affair, and I’m sure many will be fine with the critical aspects I uncovered. To these ears, Blood & Iron need a touch more refinement before achieving a stronger foothold in a crowded traditional/ true metal scene.