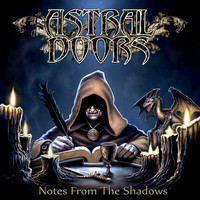 ASTRAL DOORS – Notes from the Shadows

Discovering this band as a result of vocalist Nils Patrik Johansson’s other work in Wuthering Heights and Lion’s Share, Sweden’s Astral Doors perform in classic heavy metal template – using the influences of Rainbow, Deep Purple, and Dio to create their own anthems and occasional epic forays. They came out of the gates very impressively on their first two efforts "Of the Son and the Father" and "Evil Is Forever" – but I think struggled to sustain momentum a few years later, as 2010’s "Requiem of Time" contained 14 songs and many thought the well was running a little dry as far as the right hook/ melody/ riff combinations.

This seventh album has been a couple of years in the making, and as a result "Notes from the Shadows" comes back to the heart of Astral Doors in terms of their strengths. Locking onto those bluesy heavy metal chord combinations, fleshed out with the right organ parts and then hammered home by commanding melodies and the versatile register of Nils. One listen to the slinky, low end groove for "Shadowchaser" or the mid 80’s period Ozzy oriented "Walker the Stalker" and I think even the casual listener will be toe tapping, fist pumping enthusiasts. Don Airey and Jon Lord would be proud of the fiery ivory charge Jocke Roberg puts forth on "Desert Nights", weaving in and out of choruses and verses while guitarist Joachim Nordlund adds in a break that has heroic spirit while not forsaking the semi-commercial feel of the song.

And of course early Dio comes to mind when checking out two particular highlights – the circular riff action within "Wailing Wall" and the 9 minute plus epic "Die Alone", the latter combining the feel at times of "Egypt (The Chains Are On)" with classic Blackmore/ Rainbow moments. And Nils is pure class all the way in terms of his phrasing, melodies, and range – heavy metal all the way, channeling the best of Ronnie James Dio, Ian Gillan, a touch of David Coverdale and even the darkness of say Blackie Lawless.

The 11 tracks will not disappoint the faithful Astral Doors followers. If you miss Dio and Rainbow, "Notes from the Shadows" will be a welcome addition to your collection.