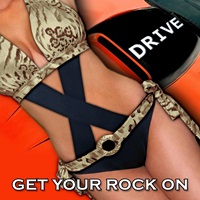 X-DRIVE – Get Your Rock On

A hard rock project developed by guitarist Jeremy Brunner, X-Drive includes Burning Rain vocalist Keith St. John, ex-White Lion bassist James LoMenzo, and drummer Fred Fischer – and on their debut album "Get Your Rock On" has a lot of that arena anthem 80’s spunk and spirit full force within its 12 songs. Keith’s voice on material like the power ballad "Baby Bye Bye", slinky "Rattlesnake Eyes" and good time title cut has a lot of Ian Astbury/ The Cult edge if taken in a Sunset Strip direction.

As far as the music, expect radio friendly melodic hard rock that is quick to hit the hooks and choruses at you, then figure out a way to keep those strong chord progressions and grooves cemented from one track to the next. Be it the picturesque lyrics describing all things "California", the Lynch Mob meets Babylon A.D. driving guitar parts for "Turn the Noize Down" or the acoustic oriented ballad "Change of Heart", you can tell the quartet of musicians dig deep into their craft and create emotionally charged material that is made for those who seek excitement and 46 minutes of music that makes all their stresses of the day slither away.

Let’s hope that enough people get behind this band to see a follow up. Remember the times when this music filled the night clubs and the best bands moved up the ladder into arena settings? X-Drive has that type of sound tailor made for the biggest stages they can find. "Get Your Rock On" is another melodic hard rock effort that is bluesy, filled with stellar songwriting, and should be heard by all fans of this genre.