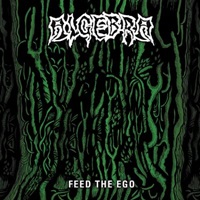 The second album from Swiss thrash band Algebra brings me back to my teenage years discovering the plethora of original acts performing in this style from North America and Europe. "Feed the Ego" is a street level affair, 9 songs that represent an accurate assessment of what you would expect from the quartet in a natural setting.

Guitarist Ed Nicod handles the vocals, and he has more of a forceful, shouting delivery that is in line with Nuclear Assault or Exhorder versus a more melodic singer, which works to his advantage on a lot of the mid-tempo to speedier fare such as "Prisoner Outdoors" (love the quieter clean Forbidden guitar interplay between Ed and Phil Void during the instrumental sections) and the semi-blasting "The Fort Broke". Drummer Tony Sharp certainly has studied the greats in the genre, pummeling his kit in a whirlwind a la Dave Lombardo, Gene Hoglan, and Ventor on the Slayer-esque "Survival Nowadays" and moodier, shape shifter "Profound Guilt"

Algebra excel at not flooding their songs with a multitude of riffs, they choose to build off of strong, effective chord combinations and build through dynamic contrast/ intensity to get their ideas across. "Feed Me More" is a great example as the echoing guitars and bass start off slow and then get more circular as the arrangement unfolds – something that was developed I believe a little more in the late 80’s / early 90’s through artists like Evil Dead and Sepultura – while always maintaining a half time, mid-tempo groove break that promotes incessant hair windmills or neck whipping.

Producer Andy Classen gives Algebra a natural overall sound, maintaining clarity but not giving these musicians a clipped, digital-oriented final product. In the end, this Swiss band should be proud of their songwriting and recording, as they push forward a sound from the late 80’s / early 90’s that many bands choose to ignore.

THE DAGGER – The Dagger