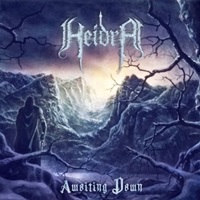 Inspiration began in 2006 for this Danish unit, as Heidra desire to create music that floats along melodic, epic, and power/symphonic meets folk/black metal lines. Working their way through a series of lineup changes, two demo recordings, and their "Sworn to Vengeance" EP – the sextet finally secured a reliable drummer in 2012 with Mikkel Køster. "Awaiting Dawn" is their debut full length, a 9 track record that has a galvanizing pulse running through, as if the band is ready to defend any land in a warrior way.

Melody seems to be a constant throughout – it can often be signaled through a simple keyboard pattern and then built upon through a series of harmony/cultural runs in twin guitars, as it is for "Betrayal" – or in a neo-classical meets power way, a la the Rhapsody-like circular breaks and riff choices during "The Eyes of Giants". Morten Bryld handles the main vocals, joined in choir sessions by bassist Morten Kristiansen, and you can expect a mix of death/black growls and screams during most of the main verses, along with clean choirs that are prominent in the folk community. I can see many in the audiences clapping, stomping and doing the jig to the slower anthem "Wolfborn" just as much as screaming in unison for the epic electric trilling throughout the 7 minute plus title cut – symphonic keyboards signaling the transitions seamlessly.

Ultimately Heidra has the ability to cross a number of sub-genres in their sound – but at the heart this is melodic, epic folk metal that should appeal to people as much into Ensiferum as they are into Moonsorrow. A band to keep an eye on, "Awaiting Dawn" is a strong debut that I think will gain traction especially if they have the ability to carry their music professionally in a live environment.