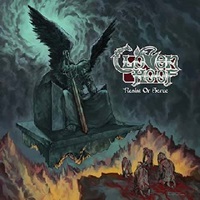 Back for a second go around in 2001 following their 1980’s presence among the NWOBHM scene, Wolverhampton, England’s Cloven Hoof are on their sixth studio album with "Resist or Serve". Bassist Lee Payne is the sole survivor so to speak from the old lineup to the new, but he’s surrounded himself in a quartet of capable musicians that create more potent heavy metal through these 10 songs.

Much of this material has a straightforward, heads down approach that lives for the mighty, solid guitar riff that can contain just as much melody and harmony elements as the choruses will vocally. "Helldiver" immediately grabbed my attention, the opening very Sabbath-y before picking up the pace a pinch and guitarist Joe Whelan’s sinister vocals convey a bit of evil snarl – the minimalistic chorus simple and oh so effective. The twin guitar harmony runs from Whelan and fellow guitarist Chris Coss align seamlessly, often injecting a lot of power metal elements with occasional flash on personal highlight "Brimstone and Fire".

Another aspect I enjoy about Cloven Hoof in 2014 is the fact that the production has more of an analog, old school feel – the tones are very primal to remind people that this is heavy metal and that you can be clear without having to Pro Tool every element sonically. Much of the riffing just has the 80’s power and texture, not wasting any time getting to the heart of the matter – check out "Anti Matter Man" or the semi-dark "Premature Burial" that will implore incessant head banging moments.

Given the second and third generation now digging deeper into a lot of the original NWOBHM acts, I think Cloven Hoof benefit greatly from their status and also delivering strong new material to boot. "Resist or Serve" should be essential for all British metal fans.