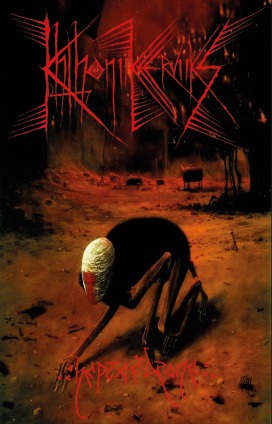 ‘Heptaedrome’ is the first album-length release from German trio Khtoniik Cerviiks, published only on cassette (Why? What if I don’t have electricity in my cave? What if I sold my cassette machine 27 years ago to buy a betamax video player?) and limited to 300 copies (Why not just issue a one-off wax phonograph for that trve kvlt feel?) .

The music sounds exactly like the cover would have you imagine: this is dark, bestial black/death with an ugly, chaotic, idiosyncratic leaning. That alone makes it stand head and shoulders above the competition. Where other bands seem to make the traditional writing choices and follow the conventional scales and chord progressions, Khtoniik Cerviiks go out of their way to come up with something strange and unexpected. And this is a mission in which they are successful. Check out the riff in ‘The Grand Sidereal Swindle’ to see what I mean. It conjured up a hellish insect army that laid its eggs in my brain and infected my dreams for days. And that isn’t just a convenient figurative description – I couldn’t get it out of my head for weeks. I can’t think of a more eerie, unsettling song that has been released this year. The whole of ‘Heptaedrome’ is infected with this otherworldly sense of ‘wrongness’. It feels dangerous. It feels off-kilter, possessed by a strange, manic energy. It feels occult. Look at the cover, the logo, the song-titles and listen to the music – you will ask yourself ‘What the fuck are these guys on about?’ But in a good way, because by the time you have listened to them you will have become a host, a vector for their twisted message, a path between their will to create and the outside universe. You will have become the cervix… one of the chosen 300.