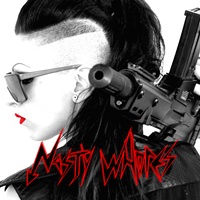 This Italian quartet certainly throw their feet into the fire as far as a name that will provoke controversy – as four male musicians playing in the hard rock genre calling themselves Nasty Whores will get a lot of press coverage. Starting in 2008 as teenagers, they spent a lot of years finalizing the best lineup, recording their first demo CD "Get on Your Knees" in 2012 – and now they are ready to unleash a debut full length album on the public.

Recording domestically took place at Dyne Engine Studios while they sent the mastering to Fascination Street Studios in Sweden- so you have nothing to worry about sonically as this sounds amazing. The 10 songs have a strong melodic hard rock basis, guitarist dUKEq handles the vocals and has a very similar grit as Mat Sinner on his Sinner discography – check out "Broken Heart Never Dies" and the mid-tempo highway follow up "Wild Star" for his determination and conviction. Trixy TH has a tasteful lead break ability – not seeking to cram the speediest licks in the business, but delivering serviceable work on the head banging Priest-like "Hell Train" just as much as the groovier "Burning in Hell".

Bassist Bobby Big Show and drummer Rob RoleX (you have to love the stage names!) provide the locked and loaded rhythm section you need to get the hooks, riffs, and melodies across in a timely, appropriate fashion. I would guess that a lot of the lyrics are very much in the party/ sex/ wild living lifestyle – and as such "Nasty Whores" provides a soundtrack to liven up any hard rock occasion. Nothing groundbreaking, but effective in terms of entertainment if you love that street level sound with easy on the ears choruses.