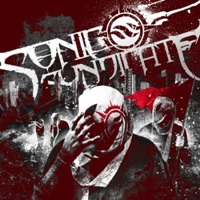 As my age advances, keeping one ear to the modern ground remains a see-saw battle. Change is inevitable, often hard to accept. Sweden’s Sonic Syndicate sonically live for an alternative rock meets metalcore style, featuring good cop/ bad cop vocals, a boat load of purpose ‘groove’ parts and staccato oriented chord choices and tones along with a lot of easy on the ear oriented choruses. Their fifth album is ironically self-titled – yet signaling not much of a change from their last record, 2010’s "We Rule the Night".

Where do I begin? Let’s talk about the open ‘tin can’ snare tone throughout – one I fail to see the value of, because if it didn’t work for Metallica on "St. Anger", why would it all of a sudden work in songs such as "Long Road Home" or the nu-metal meets exotic Soilwork oriented "Before You Finally Break"? Deep into the album Sonic Syndicate decides to perform a 5:47 cut that has emo/ alternative clean vocals competing against Nathan James Biggs hoarse metalcore forceful screams – "So Addicted" an obvious commercial attempt to expand into wider appeal. Then you have the Linkin Park oriented electronic aided parts that maybe the 20-something generation digs, but to my ears have no place in metal as a whole – welcome to "Black Hole Halo".

Sonic Syndicate can display anger, hatred, disgust, contempt, and all these negative emotions – and probably channel them best to a disgruntled audience that needs a release. For my money, any kind of metal works best when it makes a deep connection – and I fail to see where most of this material will end up a few years from now. And now I return to the Iron Maiden catalog to wash the disgust of "Sonic Syndicate" out of my mouth.