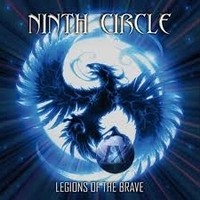 NINTH CIRCLE – Legions of the Brave

An interesting and very entertaining melodic metal band from California, Ninth Circle on their third album "Legions of the Brave" assemble the best aspects of late 80’s/ early 90’s power/ progressive metal along with a strong AOR vocal harmony sheen. Heir Apparent, Psyco Drama, and early Royal Hunt come up the most when taking in stellar tracks such as "After the Rain", "All or Nothing", all the way through to a slow ballad such as the organ filled "Going Home".

As a vocalist/ guitarist Dennis Brown has a multi-faceted approach, very tender in the lower registers but much like DC Cooper or Joey Tempest in the mid-range and higher echelons of his delivery. Check out the slightly gallop oriented / Europe throwback "In Evil We Trust" or the outer world elements for "The Quickening" and be mesmerized through his choice of phrasing and execution. Bassist Frank Forray and drummer Dave Davis also make wonderful three part harmonies in terms of the choruses, which again elevates their material to another level that hasn’t been heard to these ears since the days of New England, Orion The Hunter, or other late 70’s/ early 80’s bands in that mold.

I am a little bummed about the slightly squashed drum sound that seems distant in comparison to the guitar, bass, keyboard and vocal aspects – but that is forgiven when you look at the excellent hooks, chord/ riff construction, and through attention to detail when it comes to these final arrangements. The Deep Purple cover of "Stormbringer" digs deeps into one of Ninth Circle’s probably big influences growing up – and they figure out a way to make it their own through that AOR vocal richness along with a killer organ solo.

For my first time taking in Ninth Circle, I feel very excited to go back and take in the other two albums. "Legions of the Brave" is a stimulating melodic metal album with strong 70’s/80’s AOR ties – one that should gain major acclaim from fans and bands alike.