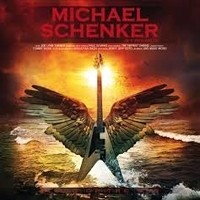 MICHAEL SCHENKER AND FRIENDS – Blood of the Sun

A fun release for guitarist Michael Schenker to take on some of his favorite songs through the years along with an all start cast of singers, "Blood of the Sun" is a 14 track record featuring the likes of Gary Barden, Jeff Scott Soto, Joe Lynn Turner, Tommy Shaw, Jeff Pilson, Paul Di’Anno, and Sebastian Bach among others. The songs include "Out in the Fields" (Gary Moore), "Finding My Way" (Rush), "Money" (Pink Floyd), and "Hair of the Dog" (Nazareth) – as well as "Doctor Doctor" performed with vocals by Jeff Scott Soto and instrumentally.

There’s no doubting the man’s talent and ability to transfer his skill set to a future generation of guitarists. Feel and technique become a see saw act that all great musicians wrestle with – yet Michael has always maintained a killer emotional quality to his riffing and lead breaks that you can pick out instantly. And then getting a chance to play guitarist side by side with Mountain’s Leslie West on the title cut must have been a long time dream come true.

At 75 minutes, I question the inclusion of a second instrumental version of "War Pigs" when the vocal rendition with Tim ‘Ripper’ Owens would suffice – but I guess those who can’t get enough of Michael will have the choice to skip over this if they wish. If you love hearing a great hard rock guitarist tackle some of the best rock songs from the 70’s and 80’s, "Blood of the Sun" isn’t a bad pick up at all.

UNDER THE CHURCH – Under the Church