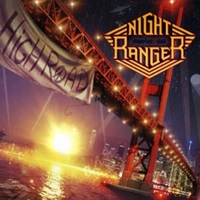 California’s Night Ranger continue to re-establish themselves as one of the premiere American melodic AOR meets hard rock acts through their consistent live performances as well as cranking out potent studio albums. Their last two studio records (2007’s "Hole in the Sun" and 2011’s "Somewhere in California") possess the right balance between catchy rockers, good time hooks, and their known penchant for creating emotionally connected ballads. Would "High Road" be the trifecta for the current Night Ranger incarnation, or possibly has the band worn out their known formula?

Well in my opinion, bassist Jack Blades, drummer Kelly Keagy, and guitarist Brad Gillis haven’t lost any of their seasoned skills in terms of musical and vocal interplay. Joining them on this album again is second guitarist Joel Hoekstra and keyboardist Eric Levy, and its apparent right from the vocal harmonies and breezy hook that the opening title cut sets the stage for more sing-a-long, wind whipping through your hair material. "High Road" could have been something I sense appearing on the "Big Life" album, while the follow up "Knock Knock Never Stop" has a little bit of that Jack Blades/Kelly Keagy vocal charisma, a ‘nursery rhyme’ like verse pattern and some killer lead break tradeoffs between Gillis and Hoekstra – possibly one of the heavier tracks on the record.

I question the inclusion of Def Leppard/ Loverboy oriented ‘hey..hey…yeah’ style background vocals on "Rollin’ On" for instance, a trick I would think needs to be employed by acts who can no longer pull off strong melodies – but this track contains some cool up tempo instrumental parts from Levy and some classic whammy bar antics at the end. The ballad "Don’t Live Here Anymore" features Kelly’s heartfelt vocals, building up slowly in the verses into this blistering guitar break conclusion – and hopefully prove that they aren’t going to write the prototypical "Sister Christian" song in this category again.

Of the 10 songs in the main, "High Road" maintains this cool veneer, "X Generation" tipping its toes musically into the first two studio albums past through its guitar structure and steady mid-tempo groove while staying relevant for today’s scene in the lyrics while "Hang On" has a lot of their historical influences coming through, a solid Zeppelin meets The Beatles effort in an AOR alley. I also enjoy the acoustic instrumental bonus cut "LA No Name" where Brad and Joel get to flex a little bit of their classical / shred chops.

Time will tell in the fans eyes if this will stand up to their previous discography, but I believe "High Road" is another relevant piece of Night Ranger’s strength in the genre – and allow them to thrive on the live market wherever they decide to go.