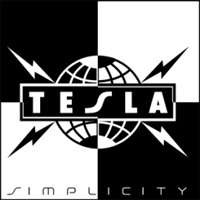 It’s rare indeed to have four-fifths of an original lineup from a classic US hard rock band of the 1980’s still together and cranking out new studio albums in 2014 – but this is the case for Sacramento, California’s Tesla. Jeff Keith, Frank Hannon, Brian Wheat, and Troy Luccketta have Dave Rude as their second guitarist, and he’s been in the band now for over 8 years – cranking out another studio album with the spot on "Simplicity".

The strengths of the band remain bluesy guitar driven riffs from Hannon and Rude, the steady rhythm groove of Wheat and Luccketta, plus the soulful twang from Jeff Keith holding it all together. The band settle into a comfort zone and deliver right hook after left as a premiere, veteran act should – making "Rise and Fall", the UFO/ Zeppelin throwback "Flip Side!" and stripped down ballad "Life Is A River" three of many cuts that resonate immediately and leave me humming chords and melodies for weeks on end. And you have to love some of the southern charm and piano/ blues harp elements intertwining in the semi-acoustic, semi-electric "Cross My Heart" which is in line with such Tesla standards as "Try So Hard" or "What You Give".

Considering how I’ve been following the band from their incredible "Mechanical Resonance" debut effort of 1986, "Simplicity" is their best effort in at least 20 years – the band may be getting a little older but they haven’t lost any sense of timing and dynamic hard rock touch. Getting the job done is a major part of the battle – reward Tesla through your purchase of this record and attending a show down the line.