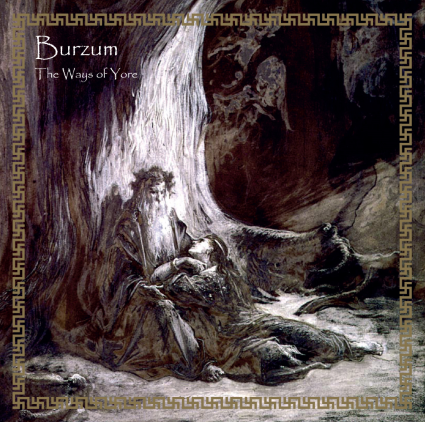 BURZUM – The Ways of Yore

I will be the first to admit that whenever the release of a new Burzum record is announced, I get all excited and impatient. Now that the album is out in most well-stocked record shops and stores, let us get down to business and discuss the man’s latest musical output, shall we?

"The Ways of Yore" is the 12th Burzum (full-length) album overall and is somewhat in the vein of the previous album, "Sôl austan, Mâni vestan", in terms of musical content and atmosphere, and yet the two albums are not entirely similar. I am tempted to say that the musical blueprint is pretty much the same in the sense that both are founded on rather simple, haunting, and melancholic melodies and moods having been woven together, thereby taking the listener on a journey and transporting him or her back in time to a place of beauty and wonder. I must admit that "Sôl austan, Mâni vestan" was a bit of a disappointment in some ways, but let me stress that I did not find it irrelevant or anything like that. It was just a bit too uneven and uneventful in places in my humble opinion. It was not quite up there with the best of his work. "The Ways of Yore" has a lot more substance to it compared to its predecessor and it is a moving and otherworldly listening experience for sure. The album consists of 13 songs, 2 of which are re-recorded tracks ("Emptiness" aka "Tomhet" off the "Hvis Lyset Tar Oss" album and "To Hel and Back Again" off the "Fallen" album), all amounting to nearly 70 minutes of Burzum-esque brilliance. The English lyrics work very well as do the ones in old Norse. Granted, Vikernes is not the best vocalist to grace the face of the earth, but who gives a shit, because what he does is that he infuses his songs with something heartfelt by means of chants, clean vocals, and spoken words, and they underline the atmosphere of the songs and lyrics perfectly, which is the most important thing. Some of the most intense songs are "Hall of the Fallen" and the title track while some of the most beautiful and sad tunes include "The Reckoning of Man", "The Coming of Ettins" and "Autumn Leaves". There is variation to be found here, ladies and gentlemen, although it may appear very subtle in some ways. The re-recorded songs are the least interesting and "magical" tracks on the disc, but they do not suck or anything. It is just that the album would have worked well without them, too.

While some may find "The Ways of Yore" a bore due to the lack of heavy guitars and drums and whatnot, let me tell you straight up that you are missing out on something excellent here. This may prove testing and challenging to most of you, and it most certainly requires one to focus A LOT when listening to it. Fans of the ambient creations of Burzum owe it to themselves to dig deep into this album. Put this on one evening when feeling openminded and listen to it carefully, preferably with your eyes closed while wearing the best damn pair of headphones you own.