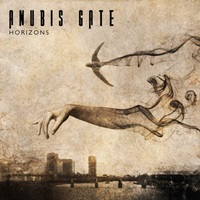 Danish power/progressive metal may not be the prevalent sub-genre in the country, but the bands that take on the complexity of the genre seem to mine pure gold from its elements. Anubis Gate rank at the top of my list, and "Horizons" proves once again that the quartet has a firm handle on developing first class songwriting with dynamic contrast and brilliant musical interplay throughout.

Melody remains at the pulse of all 10 tracks- the type that shimmers in pure AOR bliss, spot on multi-part harmonies in line with Journey, the Little River Band, or Toto. Bassist Henrik Fevre took over the vocal slot as Jacob Hansen stepped down due to his endless production schedule, and hasn’t lost a beat in terms of smoothness, alluring in a spacey way on "Hear My Call" while reaching for his upper note echelon on the shape shifting "Mindlessness" that features some killer bass/ piano to guitar transitions through the instrumental sections. The first two songs are possibly some of the best in Anubis Gate’s career – "Destined to Remember" a melding of current Circus Maximus and classic 80’s era Rush while "Never Like This (A Dream)" is just commercial oriented progressive bliss, a song that would be alluring and refreshing to hear on rock radio from car stereos across the globe- delicately using electronica against traditional instrumentation for a surefire winning hook.

Most progressive metal acts love to throw on a longer arrangement that can really showcase all facets of a band’s ability, and for "Horizons" that would be the 14 minute plus "A Dream within a Dream". This song contains certain refrain elements that lift themselves straight from "Never Like This (A Dream)", but quickly shifts into airy jazz qualities before cranking up the heaviness and tempo into something you would expect more in the current Symphony X wheelhouse, trading off acoustic and electric guitars that just give the arrangement more range of emotion, depth, and inner space.

Add in personal lyrics that delve into the mind, body, and spirit in a psychological way and you’ll have the makings of a record that has lifelong impact. "Horizons" is the sixth full length for Anubis Gate, and definitely their benchmark/ pinnacle effort in their already impressive career.