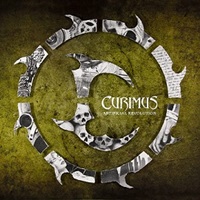 A Finnish modern thrash band, Curimus is a quartet that with their second album "Artificial Revolution" could gain moderate appeal from a wider bank of metal fans. This 10 song record contains a lot of Machine Head type squeals and crossover grooves, while the vocals are in line with Soulfly/ Sepultura or older Pantera. The band is willing to inject some slower, melodic guitar parts during "Faith & Obsession"  or propulsive triplet action during "No Feast for the Vultures" that give the listener a little bit of a breather from the normal fast paced thrash antics.

Often the drumming has this uppity pacing that often straddles the lines of 90’s Swedish death meets early 90’s Bay Area thrash – check out "Free-Standing Nation" or the viciously punk-ish "Unchained" to know that Jari Nieminen isn’t your typical one trick pony behind the kit. Ultimately the appeal has to be in the right riff, hook, and vocal combinations – and Curimus has a couple of winners here in "Preachings" and the slow building "Reincarnation". Do not expect pristine, crystal clear engineering principles – and as a matter of fact I actually prefer the rawer snare snap and thick guitar tone sitting side by side as this is how I would imagine the band to come across more in a live environment.

Straightforward, heavy thrash with death overtones and a sensible power groove throughout, "Artificial Revolution" will sit well for those in the older Soulfly, Machine Head, and Sepultura camps. Get ready to lose a lot of limbs in the pit to this, ladies and gentlemen.