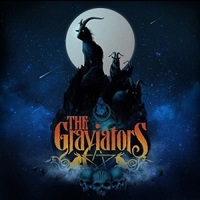 Sweden appears to be on a retro 70’s metal kick as of late- as the labels swarm to sign the best bands from this country. The Graviators is a four piece outfit performing in a doom/stoner metal platform, and on their third studio album "Motherload" they seem to be firing from all the right chambers in terms of hooks, chord choices, development of songs, and general respect for one another’s performance abilities.

Normally an album that contains 76 minutes of music and an average running time of 8:30 per song would have been tearing my hair out – yet the 9 songs on this record contain enough breathing/ jam space to keep my brain and body interested throughout. Smoldering solos from guitarist Martin Fairbanks propels "Tigress of Sibiria" and the exotic, organ-infused "Drowned in Leaves" come from a land before neo-classical shredding was the norm- wrenching out soulful, bluesy licks that have a purpose. Vocalist Niklas Sjöberg has a pure heavy metal tone, even when using filtering on the slow, lumbering "Eagles Rising" that will make many think of Pentagram or Diamond Head.

Even when The Graviators decide to throw down longer instrumental sections in epics such as the 11 minute plus "Lost Lord", the rhythm section of bassist Johan Holm and drummer Henrik Bergman just know when to flex their groove muscle and keep the song flowing along – naturally seeking out the right transitional change and where to emphasize a speedy fill or keep things laid back. The prolonged break from 4:47 to a little over the 10 minute mark will meet favor with those who love UFO era "Rock Bottom" meets older Pink Floyd, hypnotic musical brilliance that more bands need to develop into their playbooks.

I need to seek out their back catalog – "Motherload" is that strong of a doom/ stoner metal record. Proof that what may be old can be renewed again.