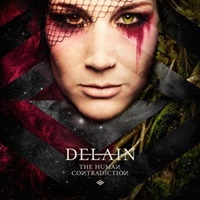 The Dutch gothic rock/ symphonic metal scene appears to be very fertile, and this quintet would be one of the main reasons why. "The Human Contradiction" is their fourth studio full length album, hot on the heels of 2012’s "We Are the Others" and last year’s "Interlude" compilation of live tracks, cover songs, and a couple of new songs. Establishing their style, you often wonder if an act in this genre will continue to veer closer to softer, commercial pastures or if they plan on throwing a curve ball to keep themselves (and their fans) on edge.

After a quiet almost fairy tale keyboard opening sequence, "Here Comes the Vultures" wins you over through a crushing guitar tone from Timo Somers and overall dark atmosphere that isn’t typical of this platform – vocalist Charlotte Wessels keeping the melody more in line with her classical and jazz background and not overly bombastic or operatic. "Your Body is a Battleground" has another wonderful main riff, the contrast lead vocals between Charlotte and Nightwish’s Marco Hietala building along the tension of the song – probably a future set list favorite that just moves the body through the keyboard and rhythmic Sander Zoer percussion bounce.

Other favorites include the sultry "My Masquerade" where again the musical chemistry works beautifully against the playful melodies (the male parts reminiscent of "Draconian Times" era Paradise Lost) and closer "The Tragedy of the Commons" – featuring evil death growls half way through from new Arch Enemy front woman Alissa White-Gluz. Kudos to Delain as well for keeping the album length at a reasonable 43 minutes – there are too many groups these days who feel the need to max out the data on CD’s but fail to realize whether all the songs are strong, full developed, and/ or even necessary.

Probably their most ambitious outing to date, "The Human Contradiction" should solidify their status in the gothic/ symphonic metal genre, and probably push them to headlining clubs/ theatres in North America, Europe, and beyond.