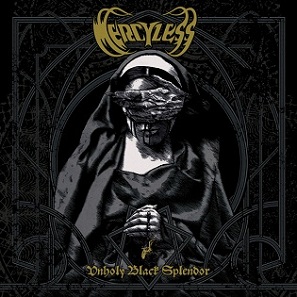 Mercyless from France was one of the country´s pioneérs in the early thrash/death genre that developed in the late 80´s. The started out as Merciless but changed their name to Mercyless because of a little unknown band (pun intended) from Sweden with the same name.

Mercyless delivered a couple of (now) classics in the genre in the early 90´s, then dropped a mega letdown in 2000´s "Sure to be Pure" before dropping of the map entirely.
The return to form comeback "Unholy Black Splendor" is proof that these french old-timers sure can write some heavy metal. Drawing influences from their own back-catalogue but also adding some newer elements into their brand of thrash/death works out great. Personally I have a soft spot for angry, but light on the ears vocals and Mercyless frontman Max Otero (who´s been with the band since the beginning) really delivers in that account.
The musikal territory is as mentioned a hybrid of thrash/early death metal and the whole package is quite appealing.
There are a couple of weak songs, a couple of ok songs and a couple of great songs that combined makes "Unholy Black Splendor" a formidable comeback and worth a listen even if you dont know Mercyless from back in the days.

INSOMNIUM – Shadows of the Dying Sun