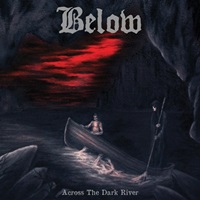 BELOW – Across the Dark River

Epic doom metal. Black Sabbath started the movement; Candlemass held the torch long and strong for most of the 1980’s and early 90’s ; and since then we’ve seen pockets of bands come and go which keep audiences interested in the style. Below hail from Sweden, a 5-piece act that started in 2012 and thanks to a split single with Anguish gain a record deal for their debut 8 song album "Across the Dark River".

To those that miss Messiah-led Candlemass, Below fits that slot very nicely. I wouldn’t compare Zeb’s vocals exclusively to the monk adorned front man, it would be more of a clearer Scott Jeffreys (Confessor) than anyone in particular – powerful, chilling, and capably conveying the anguish and despair lyrics to winners such as "Bid You Farewell" and "Mare of the Night". Occasionally the tempo moves to a power/ traditional nature, more in the King Diamond vein for bassist Hedman and drummer Doc to roll through some killer fill parts and give the slower sections that much more of a sonic punch to the gut.

At 45 minutes, Below provide the listener enough music to digest, comprehend, and not feel exhausted. "The Whitechapel Murderer" for instance is sparse at the beginning- a lone guitar and Zeb take over the airwaves before the quintet unite in mighty doom support. The guitar team of Paud and Berg know when to double up and when the segments need a clean momentum building passage – check out their work in "Ghost of a Shepherd" (one of the more swinging arrangements on here) and the soul crushing title track – something that would be perfect as a companion to "Ancient Dreams" era Candlemass.

It’s not as easy as one thinks to cultivate talent in the epic doom genre. Below though are special, exuding old school ethics and writing strong material that will hopefully garner them their own following.