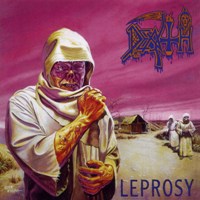 Back in the day, ‘Scream Bloody Gore’ almost single-handedly created the template for the death metal genre. Ominous chord progressions invoked the necessary horror, but it was Chuck’s riffs that fully brought it home. Nobody has, even since then, done as half much to create a musical lexicon that somehow manages to capture decapitation, disembowelment and murder in all of their red and gory majesty. But Death didn’t stop there. Chuck also excelled in terms of musical sensibilities. Who, before or after him has ever managed to make extreme music so catchy? When I first heard ‘Scream Bloody Gore’ I spent months with the riffs from ‘Evil Dead’ and the howl of ‘Mutilation’ ratcheting through my 16 year old brain. If there is a problem with modern death metal, it is that the song craft that was originally found in the genre is absent, and no amount of blasting or shredding can cover that fact.

But on to ‘Leprosy’. No matter how much you like ‘Scream Bloody Gore’, you have to admit that Death’s second outing surpassed it in many ways. The song-writing was catchier, almost to the point of feeling commercial if such a word could ever be used to describe death metal. The riffs were just as memorable, but as Chuck developed as an artist, the music became more dynamic.

In recent years I have been renewing my acquaintance with Death, and the Relapse reissue program has been a massive part of that process. In this case we have (a rare instance of ) a remastered version that actually improves on the original. If you don’t believe that could be possible you need to check out the snap on the snare drum and the guitar sound Alan Douches has pulled out of the bag here. The second disc contains rehearsals, all of which are pretty good quality, even if most of the tracks are repeated (‘Left to Die’ is on here 3 times). The limited edition third disc (3 Disc version only, obviously!) comes with 40 minutes of previously unreleased live tracks from the era and is well worth the price of admission.

With that in mind, I’d say that if funds and availability permit, the 3 disc version is the most attractive package on offer here. The only negative overall is that they appear to have made the disgusting but iconic Ed Repka cover even pinker somehow!