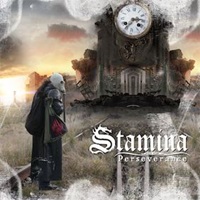 You don’t often get the chance to hear slap bass in a melodic progressive metal band- but during the instrumental break for "Higher" the opening song on Stamina’s third album "Perseverance", new bassist Lorenzo Zarone makes his ability a calling card. Still traversing a keyboard-oriented neo-classical platform that resides between Royal Hunt and Symphony X, guest vocal support from Goran Edman, Dynazty’s Nils Molin and Royal Hunt’s Maria McTurk brings songs such as "I’m Alive" and addictively rhythmic oriented "Wake up the Gods" vitality and spark.

Weaknesses in the vocal department that brought down the overall performances on 2010’s "Two of a Kind" have been rectified. The Italian progressive scene is a vital one, and an advantage Stamina has is the ability to create retainable melodies on the vocal front and pair them up with stirring riffs and not go overboard on the intricacy or technicality during those instrumental showcase moments. Even when these  musicians choose to take down the mood to a ballad for "Just Before the Dawn", there is enough restraint in the acoustic guitar laden verses from Luca Sellitto that makes his electric chord choices ring out that much more in an epic, bittersweet way.

I believe there’s enough room in the progressive metal genre for those who seek mesmerizing musicianship recordings just as much as stellar song-oriented efforts. Place "Perseverance" in the latter category, and be sure to seek out more of these records when you burn out of your Royal Hunt and Symphony X collection.