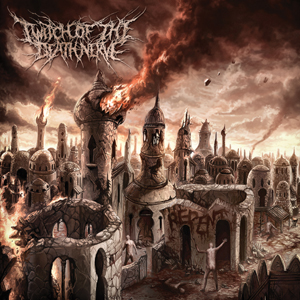 Ny Låt: TWITCH OF THE DEATH NERVE – Scores of Sores, Legions of Lesions

Comatose Music will release A New Code of Morality from UK Brutalists TWITCH OF THE DEATH NERVE on April 29.

TWITCH OF THE DEATH NERVE was formed in 2004 as a side project of Tom Bradfield and Tom Carter from INFECTED DISARRAY and BEEF CONSPIRACY. After releasing a split CD, the pair continued with their other projects (including Grindethic Records and REPULSIVE DISSECTION) whilst at the same time working on tracks for a full length release. The line-up was later completed by recruiting DEFEATED SANITY drummer Lille Gruber, and the band began working on the A New Code of Morality debut album. The style is anchored relentless brutal death metal, drawing on influences from the glory years of the scene, but also keeping a focus on interesting compositions and adding progressive elements to the sound. A New Code of Morality is now finally complete and is presented along with some gruesomely epic Marco Hasmann artwork to complement the misanthropy drenched nihilism.

1. Peculiar Perversions Particular to the Piquerist
2. Of Rutting Beasts and Drifting Herds
3. Scores of Sores, Legions of Lesions
4. Made Loose, the Bonds of Piety
5. A Hundred and Twenty Days in Sodom
6. The Repercussions of Fetus Consumption
7. A New Code of Morality
8. The Locard Principle
9. Eschewing the Advice Against Self-Trepanation
10. Well if the Turkey’s in the High-Chair, Where’s the Baby?
11. The Pitezel Family Holiday

THE ROLLING STONES til Roskilde 2014!