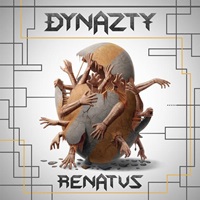 Sweden rides high again in the melodic hard rock/ metal realm, a multitude of bands resurrecting a scene thought long gone. Dynazty is another five-piece who have made a nice impression through their three previous full lengths, and on album four "Renatus" appear to engage a little bit of a heavier stance while not forsaking those ear-pleasing harmony-laden choruses and hooks they’ve been known for since their start in 2007. Bassist Jonathan Olsson is the newcomer, entering the fold last year between studio releases- and these 10 songs contain trademark guitar runs, bluesy Dio meets Russell Allen styled vocals, and a spirit of energy in line with classic Rainbow-era Dio, Firewind, and a touch of Tad Morose.

"Starlight" bludgeons through a driving point/ counterpoint riff parade from guitarists Rob Love Magnusson and Mike Lavén in a way that is familiar to latter day Symphony X or Firewind fanatics – while "Dawn of Your Creation" is dripping with AOR hints and a semi-dance like keyboard platform in the verses that volleys against the off-tempo licks and chord choices, the lead break neo-classical heaven. Stretching into epic arrangements through the 7:27 "Salvation", you get the sense that Dynazty know their strengths and wish to expand upon them, a song that would fit right in line on Dio-era Rainbow records, another impressive multi-octave vocal mastery lesson from Nils Molin.

For those that just like heads down, double bass power driven fare, I am sure "Run Amok" will suit your tastes delightfully. Versatility appears to be the operating system Dynazty takes into account for "Renatus" – and all of this material could translate fabulously across the live arenas of the world. Gravitating away from their melodic hard rock roots into a metal band, this should be their calling card to explore further as this is high class, catchy, and very professional in all aspects.