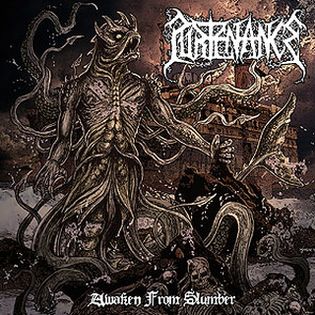 Finnish cult deathsters Purtenance is allso having an revival and releasing their second full-length since their debut back in 1992. The debut "Member of Immortal Damnation" was an instant classic back in the days and it´s been on regular rotation on my discplayer since. They captured some of the true old Finnish sound with their debut but like so many others they never seemed to capture enough of the masses to stay motivated to create the allways difficult follow-up album.

"Member of Immortal Damnation" was both fresh (for the time) and brutal and it was with some excitement that 2013´s "Awaken from Slumber" entered the MP3 player the other day.

The first thing that can be confirmed is that Purtenance have not taken any dramatic steps to "renew" themself. They still churn out deadly, crushing death metal like they did in the early 90´s. The tempo is maybe upped just a notch and the drumming is more frentic than earlier. Blastbeats combinded with some heavy chugging seems to be a winning formula for Purteance because I really like what I hear on "Awaken from Slumber".

The album is released on Dave Rotten´s Xtreem label so there was never any doubt that the album will deliver on all deathly accounts. The vocal is mid-deep growl but not easy to decipher either. It´s sadly not the original vocalist but Ville does a splendid job of delivering the dirty goods.

"Awaken from Slumber" has a generally good feeling to it and the album flows well. There are not any real ups or downs, just plain relentless death metal the way it sounds when some veterans get armed to execute their second battle in over 20 years.