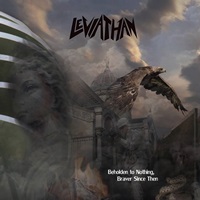 LEVIATHAN – Beholden to Nothing, Braver Since Then

The fifth studio album from Colorado progressive metal band Leviathan is a rather lengthy affair at 15 tracks and over 75 minutes in music. Know going in ahead of time that you’ll need patience to devour everything you hear, but I think those who have followed the quintet for years will know that their brand of Queensryche/ Fates Warning-esque metal still has a rapt audience.

Vocalist Jeff Ward soars like an eagle on intricate material like "Creatures of Habit" and uses more of his multi-level, emotional range for the semi-acoustic, mid-tempo building "Thumbing Your Nose at Those Who Oppose". Musically the band are successful when pumping up steady traditional rhythm patterns against a number of counterpoint riffs and dual guitar harmonies- check out "Empty Vessel of Faith" and "Intrinsic Commitment" for John Lutlow and Ronnie Skeen’s technical, textured proficiency and class. 5 instrumentals provide brief breaks from the normal progressive action, ranging from a classical-oriented "Overture of Exasperation" to the 6:42 "Magical Pills Provided", which starts in almost power fashion but then gets very Beatles/Pink Floyd psychedelic in the mid-section, giving bassist Derek Blake and drummer Trevor Helfer a little bit of the spotlight before returning to a high energy electric conclusion. This record with its intricate story telling lyrics and various sound clips should make for an exciting, engaging headphones experience as well.

Ardent followers of the genre cannot dispute these gentlemen know their craft and genre inside out. I have a special place in my heart for their early work, especially at a time in the 1990’s when the power/ progressive metal genre was in a state of flux. "Beholden to Nothing, Braver Since Then" will probably be a sleeper hit for the ProgPower world, and I’m glad to see Leviathan still flying the flag for the genre high.