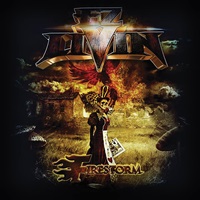 Rainbow, Whitesnake, and Bonfire are three bands that come to mind the most, with David using more of his soulful range and power- most evident in the 6 minute epic ballad "White Lightning" and slow burning anthem "The Damage Is Done". You can’t go wrong with Hans’ quick hitting licks and the propulsive Ozzy meets John Sykes-era Whitesnake charge for "That’s How He Rocks", and it’s also nice to hear some deep Rainbow-like organ work to set up the moody, slower interpretation of the Uriah Heep cover "Easy Living" – this is just classic hard rock tailor made for highway cruising, toe tapping and sing-a-longs.

David’s voice with this material seems to have more of a Paul Stanley timbre – reaching deep into his well of experience to bring the songwriting to another level as the consummate professional that he is. Let’s hope that Hans keeps the crux of this lineup together for another record soon- as I think EZ Livin’ prove that classic hard rock will never die as long as musicians are willing to crank out new songs and live through the heart and soul of this music.