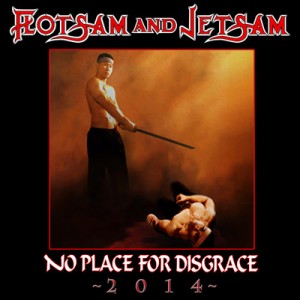 FLOTSAM AND JETSAM – No Place for Disgrace 2014

Another re-release of a classic thrash anthem.

After their crushing debut "Doomsday For The Deceiver"(1986), Flotsam & Jetsam went back to the lab to figure out how to top the seminal debut and the result became what the thrash hungry world knows as "No Place for Disgrace", released in 1988.

Jason Newsted (who wrote most of the music for "Doomsday.."  left the band just before recording to join another seminal thrash act of the time called Metallica but that did not seem to have an impact on  F&J.

Vocalist Eric Knudsen & Co let everything go and (in my book at least) topped their debut with an inch or so..

"No Place.." saw the US (Arizona to be exact) band take their thrashing to the next level on both melody and furiousnes creating a mastepiece that holds the test of time today.

The tempo on the drums is (for the time) full throttle when needed but the arrangements make space for both slower parts and parts where vocalist AK superior voice get´s the oppertunity to shine.

Flotsam & Jetsam are still active today and their back cataloge is filled with stellar releases but they have (again in my book) not been able to top their two first outputs yet.

The re-release make the the album finally available to new listeneres and if you´re interrested in the history of power/thrash metal and good metal in general this gem is for you to check out.