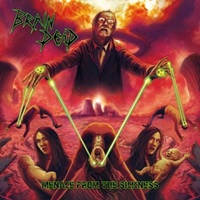 BRAIN DEAD – Menace From The Sickness

Old school style thrash metal from Italy here with the quintet Brain Dead and their second album "Menace from the Sickness". Naming themselves after an Exodus song, it shouldn’t be surprising that a lot of their riff tricks, tempo changes, and spirit resides in that classic Bay Area mold. Vocally Felix Liuni has a barking meets semi-acidic nature that gets the job done but isn’t really going to bring Russ Anderson or Chuck Billy to mind.

The band prefer longer arrangements where instrumentally they can build up the song structures- the slower evolvement of "Another Way" with its Middle Eastern chord progressions and the slight galloping nature for mid-tempo closer "Total Despair" in line with what one could expect from Laaz Rockit or Exodus during the early Steve ‘Zetro’ Souza years. Guitarists Daniele Vitello and Davide Ricca form a bulldozer tandem in terms of rhythms, slinging about riffs that will become mandatory for headbanging in favorites like "Evil Dead" and "Final Truth" (the latter opening with a sequence not dissimilar to "The Last Act of Defiance").

Debate reigns over whether these second/third generation thrash acts who mirror their heroes are developing their own sound or merely cutting and pasting their favorite riffs / songs in an attempt to call things their own. "Menace from the Sickness" will not gain favor from the originality police, but if you are just looking for some good, violent, fun thrash- Brain Dead more than adequately supply the tracks to achieve fan acceptance.