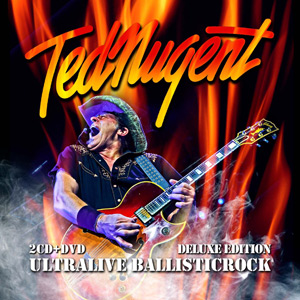 70´s rock hero Ted Nugent are still alive and kicking and to prove it he´s releasing another live album (last one from 2009) baptised "Ultralive Ballisticrock".

Personally I´ve never been a huge Nugent fan, but I remember giving the man a chance when I was in middle school and not being to impressed.
He´s incredible popular in America and thats the horse he rides hard on "Ultralive Ballisticrock". The dobbel album is packed with both familiar and not so familiar rock themed songs from "Uncle Ted´s" 40 years long career and the crowd seems to love it.

Some of the songs are very good, some work only in a live setting and some are just not meant for me.

The good ones are the ones that his "not fans" may have heard like Wango Tango (actually quite funny), Just What The Doctor Ordered, Cat Scratch Fever (maybe his most known track), Stranglehold, Great White Buffalo and Fred Bear.

My biggest problem with this live CD/DVD release is all the talk/banter Nugent does inbetween the songs. It´s just to much of everything and nothing. He´s really tries to get the audience going and if I was there I´am sure I would appreciate it, but it just gets boring/annoying on a album setting.

"Ultralive Ballisticrock" is a living proof that Ted Nugent still rocks hard, but I guess you already knew that if you´re a fan of "Uncle Ted´s" classic rock.

PLACE VENDOME – Thunder In The Distance