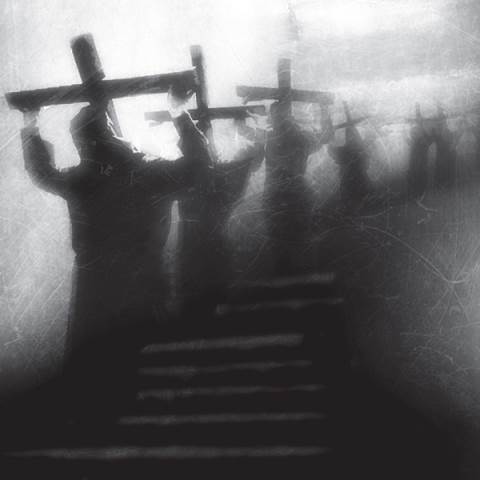 "8 ½ – Feberdrömmar I Vaket Tillstånd" is not a typical Shining album, especially if you define Shining based on the material released after the Eerie Cold album. What you get is an insight into the material that became the "Livets Ändhållplats" and "Angst, självdestruktivitetens emissarie" records.

To find the origin of this album you have to look back at two bootleg releases Niklas Kvarforth probably would have erased from the face of the earth, namely "The Darkroom Sessions" and "Through years of Oppression." These containes pre-productions of some of the songs that were released on the second and third album, the two songs from the first 7 "… among others.

These pre-productions, which was without vocals on the bootlegs, now have a new vocalist for each song, and is mixed into something that sounds far better than what you get on the bootleg discs. The outcome is perhaps even rougher versions of the songs than you get with the originals, although some of the Shining magic created by Kvarforth is missing. This is nevertheless a long way from what Shining is today, and has been since Halmstad, and this will probably not be an album new fans will appreciate the most. This is a reminder of how close Shining was to the black metal genre many years ago, and hopefully those who buy this album might appreciate Shining even more as they look back into the history of the band.

The five singers who contributes on the album have treated the songs with respect, and they have in no way weakened the material that existed before. If you love black metal, and somewhat unorthodox music, this is really an album you should check out and give a chance. But then again, you should also do yourself a favor – check out the originals, because Shining have released some really great albums during their career.