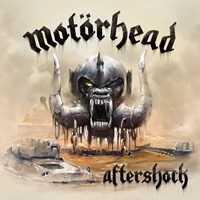 Take a licking and keeps on ticking, Lemmy Kilmister and the boys of Motorhead rev forward on their 21st studio album "Aftershock". I’m sure most are aware of Lemmy’s heart issues that cut short their Wacken Open Air performance this past summer- but it didn’t seem to stop the flow of energy and just raw musical ethics on display with these 14 songs.

When other acts may desire to capture their sound with the greatest of computer technology ease, bassist/ vocalist Lemmy, guitarist Phil Campbell and drummer Mikkey Dee appear content in Maple Sound Studios with long-time producer Cameron Webb to prefer a streamlined, direct plug in to play tone. The slower, swanky "Lost Woman Blues" would make Thin Lizzy and Jimi Hendrix so proud of their legacy. "Heartbreaker" is a steamroller as a mid-tempo opener, something that would have been as comfortable on "Bomber" as much as here. "End of Time" has a feisty Phil guitar lick that evokes classic Iron Maiden meets Fast Eddie- hopefully a mainstay in future Motorhead set lists.

Variety is the spice of Motorhead’s sound- be it a throwback to Lemmy’s early rock heritage with "Do You Believe", just pure power punch with punk-like charm in "Death Machine", or another musically emotional number in the restrained, bluesy "Dust and Glass", the trio let their creativity spill out through your speakers and we are all the better for it. And for those who miss that blistering bass that makes you burn, check out "Going to Mexico" and "Queen of the Damned" for proper low tone energy which is needed to bring out the best in this material.

At this point it’s silly to classify Motorhead: rock ‘n’ roll, metal, hard rock, punk- it is all in there and more. "Aftershock" is another brilliant 46:54 album, one that will be debated and discussed with their followers for ages. Let’s hope for our sake it will not be the last studio record- if it is though, Motorhead certainly went out on top.

SECTORIAL – Erase and Reborn the Humanity