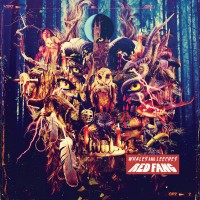 Sticking with their pattern of releasing a new record once every other year, the American quartet Red Fang is back with Whales and Leeches, pulling the title of the album from a track off of their 2009 debut album Red Fang. For the sake of order, 2011’s Murder the Mountains fill the gap between the two.

So what has changed for the American stoner metal heavy weights since their last recorded effort? Quite little actually. Whether that’s a good thing, relies upon whether you enjoyed their previous efforts or not. If you did, then you’ll have plenty more of that good ol’ Red Fang recipe for musical mayhem to satisfy you. On the other hand, if you didn’t enjoy their previous efforts, well Whales and Leeches will do little to convince you to give the band another listen.

The album offers 12 new tracks of what has quickly become known as Red Fang’s own little patch of metal heaven on the music scene. While they have clear ties to the stoner metal community, they clearly get a lot of musical inspiration from genres like punk, some doom metal as well as some classic rock to round out the mix. Overall, the album peers more towards the band’s heavy aspirations, with less rhythmic sections and less dominant guitar solos, which seemed to be more of a noteworthy characteristic with Murder the Mountains. That isn’t to say their previous efforts have been soft or anything, this is just a more conscious effort towards the band’s heavier, gloomier sides.

Even with less dominant use of guitar solos, the album does have plenty of gut-wrenching riffs, tearing deep down inside the very core of your being, as their down trodden melodies bring you further and further into their instrumental abyss. With tracks like ‘Dawn Rising’ and ‘Failure’, the band shows their true potential by offering a low, slow, almost drony riff, accompanied by a mixture of screeching and soft vocals, belting out a gloomy lyric. The album also has some noticeable highlights in the opening duo ‘DOEN’ and ‘Blood Like Cream’.

Overall, Whales and Leeches continues the Red Fang saga beautifully. It gives fans of the band exactly what they want, while simultaneously cutting the ties to people yet to jump on the band’s gravy train. In a sense it’s brave move by the band, in the day of musical variation, exploration and redefinition, to chart their direction in such a distinct manner. Whether it ends up benefiting them financially is of little concern to the album they’ve delivered as it’s just the thing to warm the soul as the Northern parts of the world head for colder days.