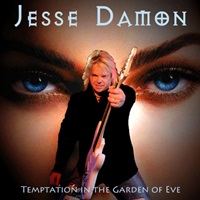 JESSE DAMON – Temptation In The Garden Of Eve

When you hear certain vocal lines mirroring a classic video track from Dio, you pay attention- good, bad, or indifferent. The song in question is "Black Widow"- the artist is Silent Rage guitarist/ vocalist Jesse Damon- and the comparison in terms of verses and overall feel to the arrangement is "Rock ‘N Roll Children" from the "Sacred Heart" album. "Temptation in the Garden of Eve" is his fourth solo album, an 11 song effort with a mix of classic hard rock and AOR at play. The main members supporting Jesse in the songwriting and performance department are bassist/ backing vocalist Paul Sabu (who also produced and co-wrote all these songs with Jesse), keyboardist Eric Ragno, and Eden’s Curse drummer Pete Newdeck.

Expect huge arena rock choruses, shimmering hooks, and melodies pouring from every speaker. Be it the mid-tempo "I Need You Forever" that recalls classic Y&T or "Let It Rock" that blends a guitar sound from the Whitesnake school with Def Leppard meets Loverboy-like vocals, Jesse exudes solid songwriting ethics and delivers material ready to take over radio stations or stages in any part of the world. You’ll also have a couple of ballads- the power driven "Save the World" with a socially conscious message to make an effort in the lives of children each and every day, and the acoustic led "Wishing Well" that brings out Jesse’s soulful side.

I know those of us who grew up with rock radio in the 1980’s and the plethora of acts from the scene will find plenty to savor about "Temptation in the Garden of Eve". Jesse lives for a time when bluesy hard rock with strong AOR harmonies came into prominence, and as such these 11 songs deliver in the great melodic mold.