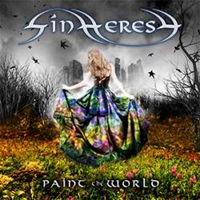 If you start off developing your skills as a Nightwish cover band, do not be surprised if some of the influence of that premier Finnish act rubs off on your sound as you write original material. Italy sextet Sinheresy releases a debut album in "Paint The World" with 10 songs of symphonic oriented heavy metal. Featuring dual male and female vocals and three members capable of tinkling the ivory keyboards, it’s easy to understand the band’s sound has a lot of commercial aspects in terms of uplifting melodies and groove accents.

Sinheresy occasionally veers into heavier power or melodic death terrain at least with the guitar parts of Lorenzo Pasutto on the tougher "Break Point" or fluid "The Gambler", but for the most part elegance and symphonic/ gothic strains win out a la Nightwish, Delain, and Within Temptation. Stefano Sain has a more metallic voice than Cecilia Petrini, which will probably bring to mind the contrasts prevalent with Lacuna Coil or Amaranthe – although Stefano’s limitations come up when taking control of the verses of a mid-tempo anthem such as the title cut in sustaining particular notes of a higher range.

Those who love bouncy, peppy riffs tailor made for audience fervor or interaction will dig "Lost in the Shadows" or the tender ballad "Roses & Thorns" the most- but for my tastes Sinheresy inject far too many keyboard layers that soften the ‘metal’ aspects. Factor in one too many fluffy half- ballads with "Our Angel" and I’m convinced "Paint the World" won’t gain much of a following beyond the five figure mark in all of the world.

Maybe the second time around will be better, but for now Sinheresy are minor league wannabes in a crowded symphonic heavy metal market place.

HOUSE OF SHAKIRA – Pay To Play