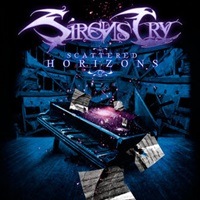 No longer exclusively a gentlemen’s club, many females are entering the progressive metal fold. Hailing from Austria, Siren’s Cry features female vocalist Katie Joanne and on their debut album "Scattered Horizons" the quintet embody a sound with symphonic tinges to their obvious intricate, sophisticated ways. Originally released in 2012 independently, Nightmare Records felt the time was right for this quintet to receive a wider worldwide push- and here we are with 9 songs and 53 minutes of music.

Imagine neo-classical and synchronistic maneuvers between guitarist Phillip R. Porter and keyboardist Michael A.Sisko – often throwing you for a jazzy loop on transitions like the one in "Elegy of R’lyeh" – while Katie comes through with more of an Epica/ Within Temptation enchanting, alluring voice over the top. Overall a lot of the dazzling instrumentation has its roots in Dream Theater and Symphony X territory- "Draconian Spectrum" and "Serpents of War" especially reminiscent of Michael Romeo’s flair for the dramatic in axe play.

Technically sharp and proficient, I do think Siren’s Cry need to spend a little more time on creating stronger songwriting hooks for ultimate individuality. What good are drop on a dime time signatures and neo-classical flashiness if the overall arrangements possess little continuity or retainable emotional connections?

In the end, most progressive metal fans should be happy with "Scattered Horizons" – especially those in the various ProgPower camps across the world. I’ll hope for less blatant influence borrowing on the follow up though.