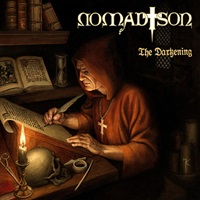 Active for 7 years and hailing from Malta, Nomad Son unleash their third album "The Darkening" on a market place hungry for some quality doom metal. Given the return of Black Sabbath with Ozzy to prominence through the chart topping "13" record and the retirement of Cathedral and Candlemass (the latter at least in studio terms), in order for the movement to flourish newer bands like Nomad Son need to create material for the legions to embrace.

Employing a full time keyboardist with Julian Grech gives "Light Bearer" and the follow up "Age of Contempt" an immediate throwback quality, his funeral chord choices familiar to fans of King Diamond as well as Dio-era Sabbath. The guitar riff and drum tempo choice for "Age of Contempt" is a little odd through the verses, almost leaning across modern lines – but I do enjoy the time change and faster double bass kicks from drummer Edward Magri as vocalist Jordan Cutajar contorts his screams and melodies into a variety of maniacal frameworks.

Other songs that will probably encourage loads of call and response audience participation from both a musical and vocal standpoint include the early Savatage-esque "Only the Scars" and creepy "Caligula" that features guitarist Chris Grech holding out some devil-like, Candlemass oriented darker tones and Jordan again transforming himself with whispers, Alice Cooper-ish sarcasm and then belting out chilling metal screams.

I can see the songwriting getting tighter and stronger with each release from the band. "The Darkening" takes the doom template and drives it home to those who love the movement, without feeling the need to become stoner or long-winded (as most of the songs clock in around the 6 minute mark). Head bang away!