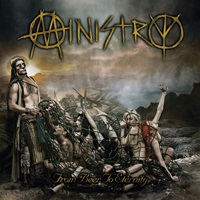 MINISTRY – From Beer To Eternity

The 13th studio album from industrial metal veterans Ministry is also one of their most eclectic. The final album with guitar playing from Mike Scaccia, who died unexpectedly on December 23, 2012 due to a heart attack, "From Beer to Eternity" contains all of the sampling, loops, computer-laden effects, and monotonous driven fare you’ve either come to love or loathe depending on your stance. Al Jourgensen is the mastermind, provoking anger throughout as "Punch in the Face" exudes its intended outlook, while "Fairly Unbalanced" has a little gallop in its guitar step, as the news stream filters in from a Fox News standpoint.

Sometimes the material errs on the side of driving your brain matter insane, as "Side Fx Include Mikey’s Middle Finger (TV 4)" has this series of echoing mechanisms that push Strapping Young Lad into the stratosphere of white noise. My favorite cut occurs near the end, as "Change of Luck" contains a slower, tribal beat and equally innovative clean/electric riff work from Mike that has a distinct Middle Eastern flavor- the 7:16 keeping your ears tossing and turning to see where Al will build from in terms of keyboards, samples, and sound bites.

I will be the first to admit that industrial metal isn’t for everyone- and as a listener I need to be in the right frame of mind to make it through "From Beer to Eternity" as 54 minutes can be a challenge to tackle in one sitting. Ministry as pioneers continue to forge their own path, and as such I doubt many will leave disappointed from this effort.